In response to the latest recommendation from the Santa Clara Public Health Department, we are canceling The Bennett Scholars Breakfast on March 19.

The Bennett Scholars Breakfast celebrates and secures the resources needed to provide wrap around scholarships for deserving students. It is also a joyous time for our community to hear from strong women leaders and distinguished Bennett Scholar alums. While the event on March 19 will not happen, we are still committed to accomplishing our goal to raise the funds for all ten Bennett Scholars to join the class of 2023. This year's breakfast was nearly sold out with over 450 seats purchased, donated, and sponsored. It is our sincere hope that our energized community will continue to give generously and help us reach our goal.

Please make a gift to help us reach our goal. Please encourage others to do the same.

GMS is committed to offering substantial financial assistance and comprehensive support to motivated girls who show academic promise and whose families cannot afford the cost of tuition. The Bennett Scholars Program provides girls from under-resourced schools the opportunity for an academically challenging education in a supportive environment.

A forceful advocate for families, children, consumers, the environment and her State of California, Barbara Boxer became a United States Senator in January 1993 after 10 years of service in the House of Representatives and six years on the Marin County Board of Supervisors. In January 2017, she stepped down after four terms in the Senate.

Senator Boxer was the ranking member of the Senate Select Committee on Ethics. She was a senior member of the Senate Foreign Relations Committee, where she chaired the first subcommittee ever to focus on global women’s issues. A national leader on environmental protection, Senator Boxer was also the ranking member on the U.S. Senate’s Committee on Environment and Public Works (EPW).

After graduating from The Girls’ Middle School in 2002 and then Castilleja Upper School, Tania Montoya-Block attended the University of California, Merced. There she founded the UC Merced Law Clinic before graduating in the top 4% of her class with a Bachelor of Arts in Economics. After university, Ms. Montoya-Block worked at the Alameda Health System as a Quality Analyst where she served as a data and regulatory consultant on patient outcomes.

Ms. Montoya-Block is now a Juris Doctor Candidate in her second year at UC Davis School of Law, King Hall. Passionate about the intersection of law and healthcare, she is the President of the King Hall Health Law Association. Ms. Montoya-Block has served as an editor of the Business Law Journal, and is a recipient of the Outstanding Oral Argument Award in Legal Research and Writing at UC Davis School of Law, King Hall. This summer, she is excited to join the team at Foley & Lardner in Los Angeles as a Summer Associate in their healthcare law practice group. When she is not busy with her law work and studies, Tania  enjoys taking her traveling the world, cycling, and taking her dogs to the beach with her husband Elliot Block.

From the Scholarship Breakfast 2019

Andrea Hernández, a Class of 2006 Bennett Scholar, inspired us with her story of courageously persevering in the face of uncertainty. "The lessons I learned with the GMS community are values I want my own students to know: Be your own best resource. Embrace the struggle. Fight for and find your place." After GMS, Andrea graduated from Summit Prep and was accepted into the University of the Pacific's Honors Program where she graduated cum laude with bachelor's degrees in Sociology and in Spanish Language with a concentration in Hispanic Language and Literature. Passionate about education, Andrea has returned to Summit Public Schools and teaches Spanish 3 and AP Spanish in San Jose. 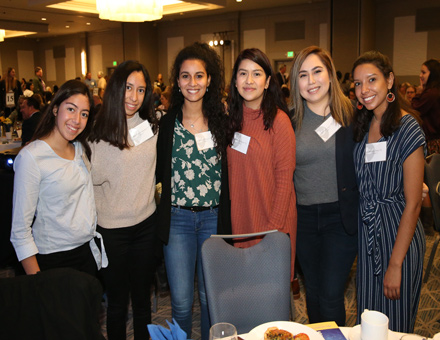